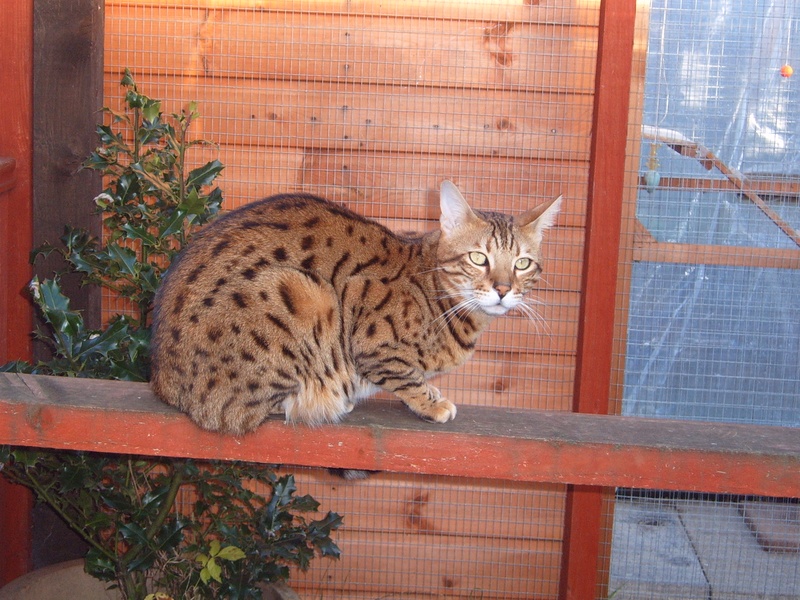 Chester was my 40th birthday present from my husband and my first brown spot bengal. Chester was the only kitten in his litter and so has always been a mummy's boy and loves getting attention from everyone. Even though he is the largest cat in the house he is a big softie and is even scared of the smallest kittens.

Chester has fantastic markings on a very light buff background colour. He has traditional spots all over his body. Chester has done extremely well at both GCCF and TICA shows. He is a Quadruple Grand Champion with TICA and loves being shown. He especially likes a show where he has to stay in a hotel the night before. Chester has a close following of admirers at the show. Although he has not been out for a while he may well make more appearances at future shows. 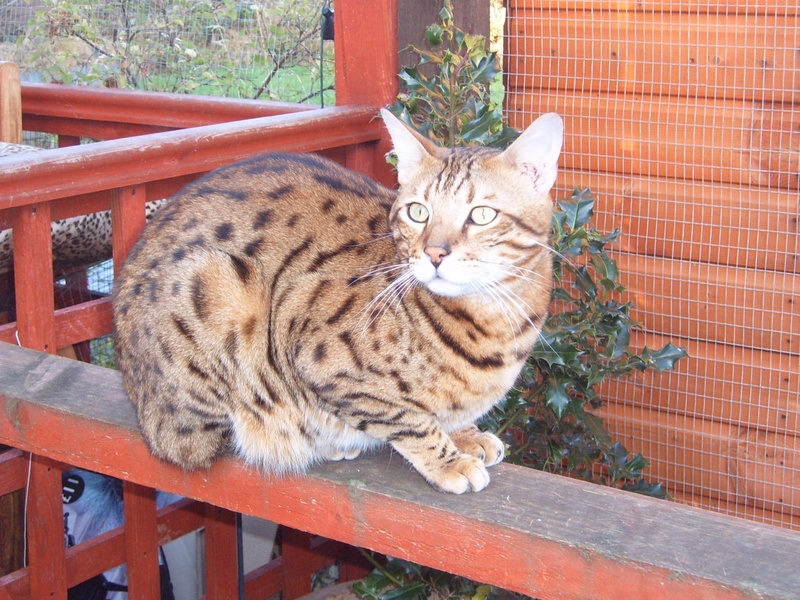 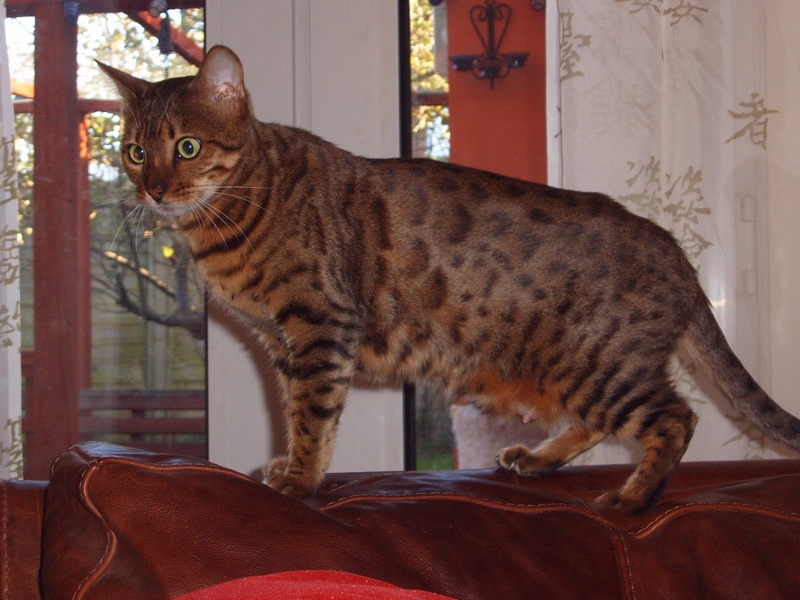 Annie was our foundation Queen from Peter & Christine Edwards of Bramblewood Bengals. As you can see she has a fantastic contrast of colours in her coat. She is full of glitter and has a very short pelty coat.

Annie did well when she was shown with GCCF winning Open classes and Best of Breed classes. Annie has had many litters of kittens and was a wondeful mother. Annie always passed on her fantastic temperament and coat onto her kittens. We still have her daughter Megan who is one of our current breeding queens.

Annie is now neutered and lives a life of luxury here at Seregon-Bengals. She seems to know she has no more baby responsibilities and is acting like a kitten herself again. She is very cheeky and loves a cuddle on my lap every night. Although Annie has Grandkkitties and Great Grandkitties around the house she can't be bothered with all that responsibility anymore. 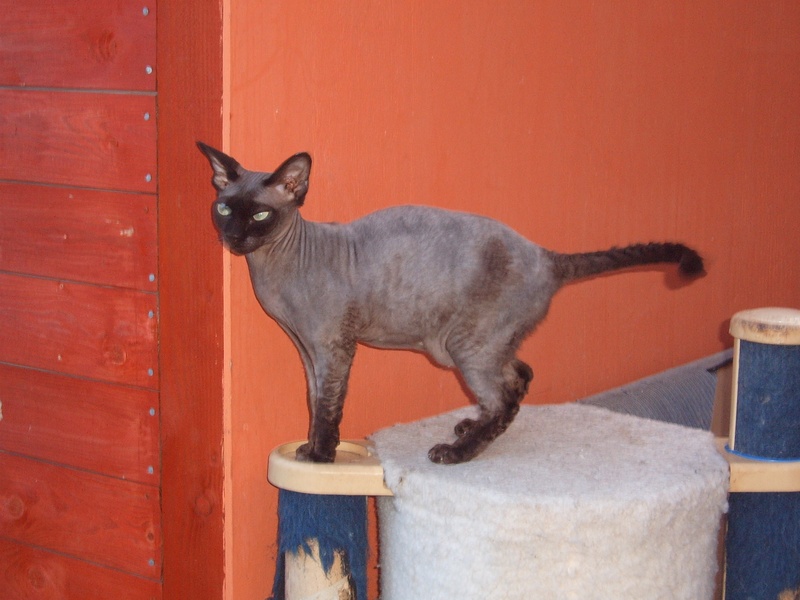 No he's not a funny looking Bengal although he thinks he is one. Merlin is a Chocolate Smoke Devon Rex. He was bought as a birthday present for my husband from me and my daughters. When my daughter took her devon rex Jasper with her we realised how much we missed their funny little characters, so decided to get my husband one. Merlin is a typical Devon who loves his food and never knows when he is full.

Devons and Bengals make great companions as their characters are very simialr. Both very clever but naughty at the same time. However you can never be mad with either of them when they are naughty and end up forgetting what they did in the first place. A few of our friends who have Bengals have also gone on to get a Devon as they have seen what great breeds they are together. 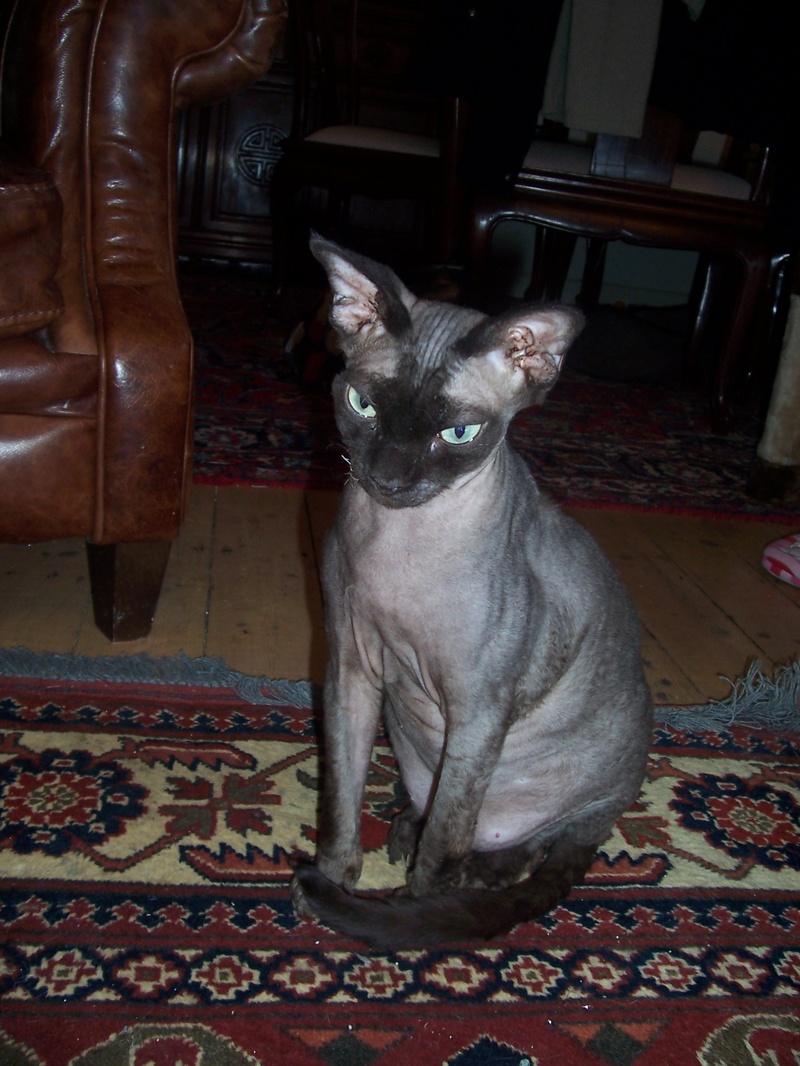 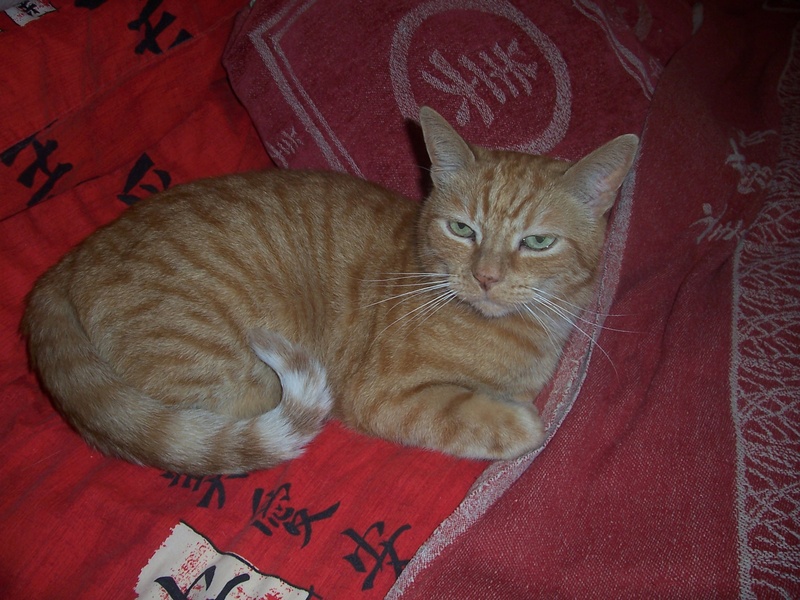 Marmaduke is our ginger moggie. Despite being 15 years old he is in fantastic condition. He has in the last couple of years become a recluse in our bedroom. He is quite happy living upstairs and will occasionaly pop down the stairs for dinner but the majority of the time it has to be taken up to him. He tolerates the other cats although not best friends with them apart from Merlin. Everybody loves Merlin. Marmaduke is an honourary bengal in the house and has a very loud purr. He loves lots of fuss and attention from anybody in the bedroom. Maddi is my daughter Rcahel's bengal. Maddi was kept form Annie's first litter and was initially for breeding, however she was always on the small side and didn't really come into season. We then decided that it would be better for Maddi to have her spayed. She lives with her mummy and brother Zeus her at Seregon-Bengals. Since being spayed Maddi has put on alot more weight and is looking fantastic. Annie passed on her fabulous markings and glittered coat to Maddi. 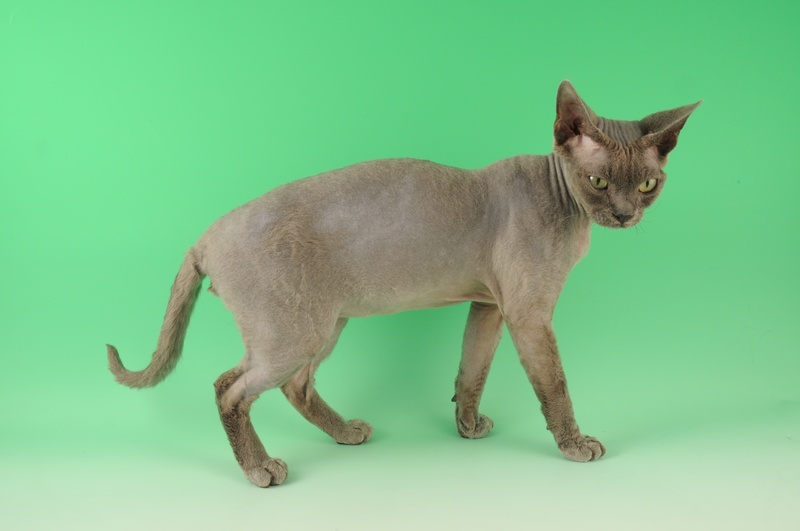 Zeus is a Blue Devon Rex. In our family we have come to love Devon's and Rachel was no exception in wanting one. Rachel shows Zeus and he is currently doing really well at TICA. He has just gained his Quadruple Grand Champion Alter title. WE are hoping to get a Supreme in the near future. Zeus is a real mummy's boy and can always be found sitting on Rachel's shoulder at the shows. 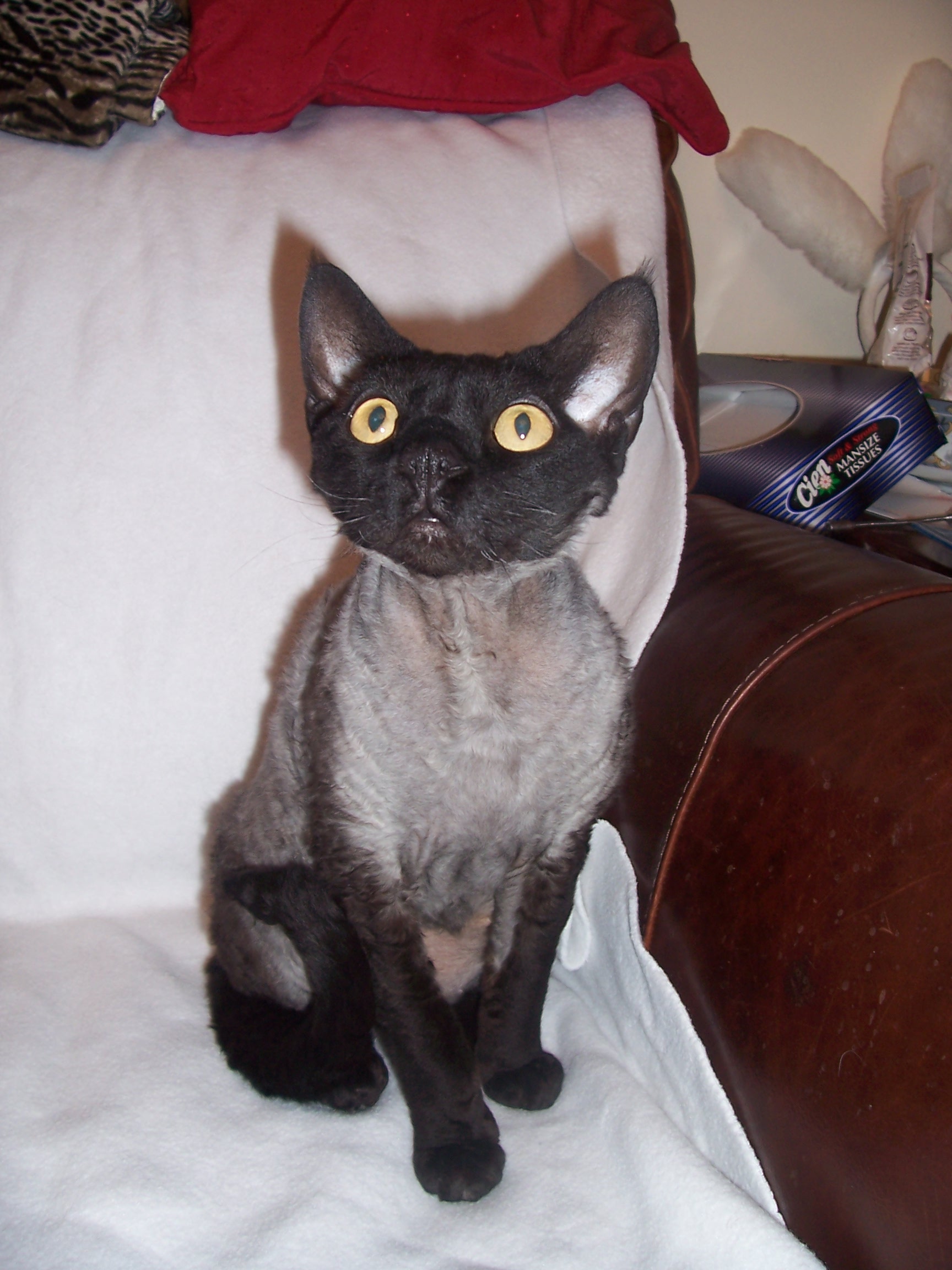 These are my Daughter Rebecca's cats. She lives in Southend-on-Sea but does come home reguarly with her brood in tow.

Jasper is a Black Smoke Devon Rex. He was the first Devon to join our family and was teh little monster who got us all hooked on them. Jasper has a form of autism and OCD but is such a sweet cat once he's settled in when he's visiting us at Seregon-Bengals. Jasper used to go to teh shows but had a bad experience and because of his Autism has never forgotten about it. Like most Devons he is a real mummy's boy and can normally be found snuggled up in a jumper like a baby kangaroo. 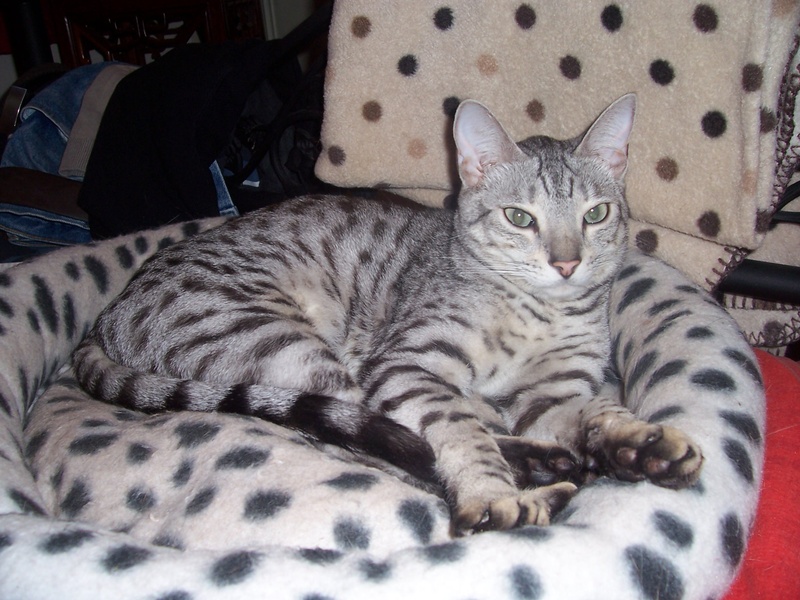 Claude is a Silver Spot Bengal. He is a real scaredy cat at times but is a real softy. He loves going to the shows and is a Quadruple Grand Chamopion Alter with TICA and has gained a number of Merits with teh GCCF. He is nicknamed 'Gay Lord Claude' as everyone thinks he is a girl at the shows and is far too pretty to be a boy.

Teddy is a Brown Spot Bengal. He is a home bred boy who rebecca fell in love with when he was little so he went home with her, although if we had sold him I'm sure he'd have been brought back to us many times over as he really is a character. He never stops talking and absolutely loves playing. He even talks in his sleep. He is a big boy weighing nearly 6kg. He loves coming up to visit us as he gets to see his boyfriend Roddy (our stud boy). They absolutely love each and spend all their time together when Teddy visits.

Teddy has done amazingly well at the shows. Last year Teddy got awarded a Regional Win (RW). He got 19th Best Alter in the Western Europoe Region of TICA, and he was the 9th Best Bengal Alter in teh World with TICA. We are so proud of him and even this show year he gained 22nd in the region. Aklthough this is not a RW it is still fantastic as he has not even attended all the shows. 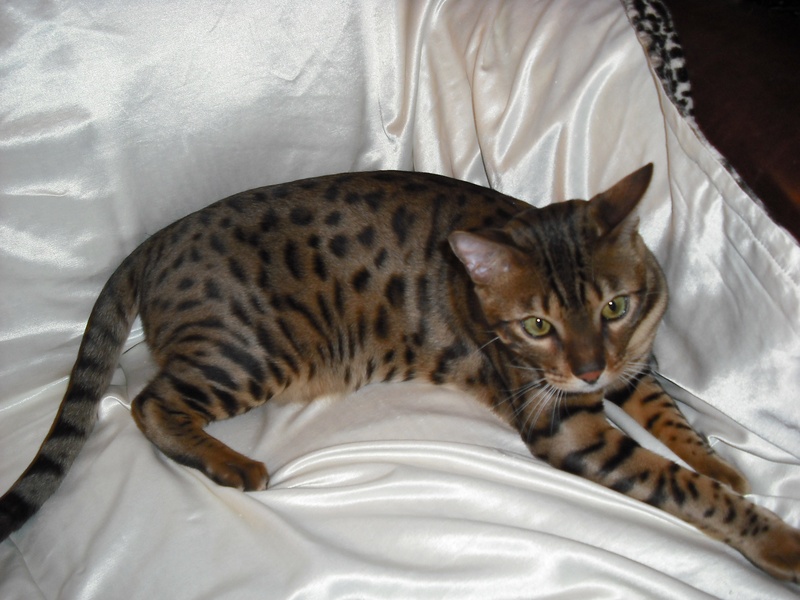 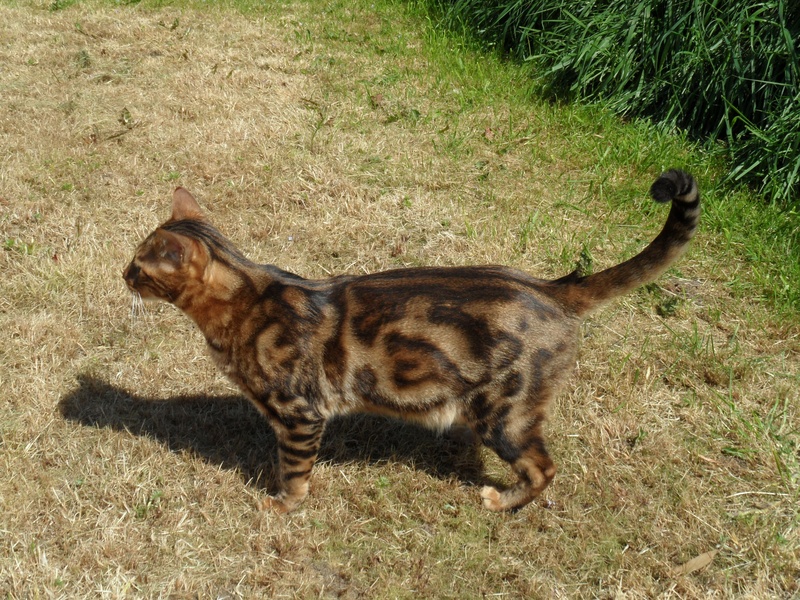 Humphrey is a Brown Marble Bengal. Rebecca fell in love with him and he stayed. Unfortunately at 6 months old Humphrey was diagnosed with Mitral Valve displacement which is very very rare in cats. We have since had his mummy neutered and she has got a fantastic forever home. His life expectancy is unknown, but he is living life to the full. He is currently medication free but we take each scan he has at a time as his heart is getting worse. Humphrey is hoping to attend shows in the furture as the vet has advised it will be fine for him to do. 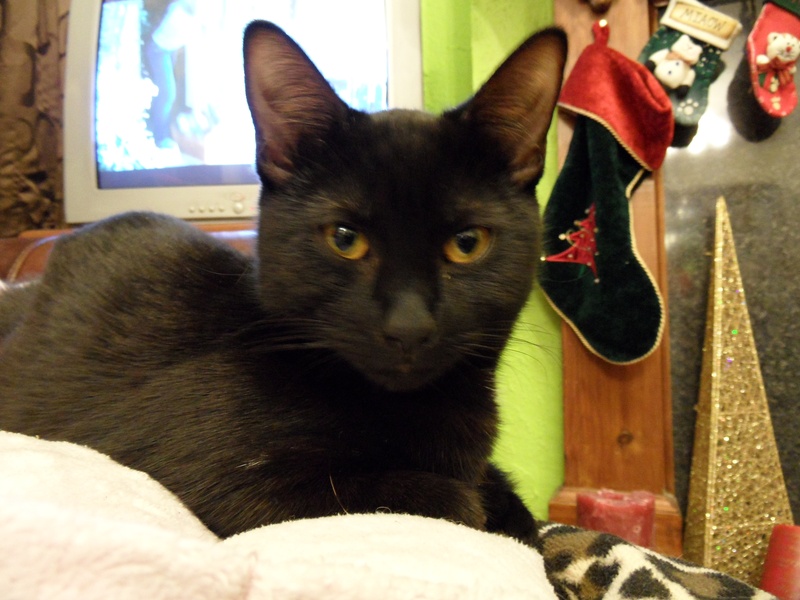 Winnie is a little stray Black Moggie who followed my daughter into her house in October and has not left since. Nobody wanted to give her a home due to her being black. She really does think she is teh Princess in her house and rules the boys. She has got gorgeous orange eyes and a silky black coat. Winnie may even start her show life in the Household Per section in the future.

Oops! This site has expired.

If you are the site owner, please renew your premium subscription or contact support.